Nick from Greyscalegorilla walks you through creating a Glossy 3D Metal Logo in After Effects with no third party plugins required. 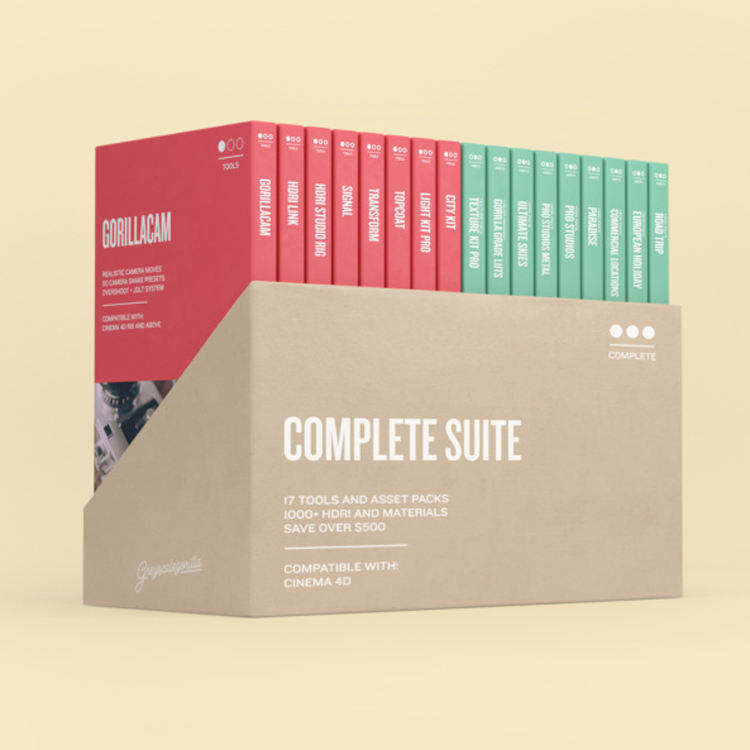 Get the whole kit and caboodle from Greyscalegorilla!

Bundle up and save on all of our tools and assets for Cinema 4D. This suite includes every single Greyscalegorilla animation, lighting, and rendering tool for Cinema 4D, plus HDRI and texture packs.

If you’re in the midwest, mark your calendars for Wednesday, September 12, 2018, 6 PM to Midnight at the Chop Shop in Chicago. Tickets are going fast!

We’ve been to several events over the past few years and they always have a great lineup of speakers. This year’s speakers include Andrew Kramer of Video Copilot; Donnie Bauer of The Mill; Bhakti Patel, animator and motion designer; and John Pobojewski of Thirst.

Tickets are still available for the event at halfrez.com. Even if you’re not planning to go, their website is a lot of fun.

Andrew Kramer from VideoCopilot.net talks about how he used Adobe After Effects to create some of the futuristic titles for the TV show “Almost Human” as well as title sequences for few other shows and movies.

Learn more about Adobe After Effects and Creative Cloud at Toolfarm.com

“UPDATE 1: We are very close to having everything ready!  But, I’m not 100% sure we are able to launch just yet!  I  don’t want to miss something small so we are going through our quality control process, and exporting videos. I  will keep you posted.

Continued apologies for the delay! We are working tirelessly to make this plug-in rock!

In all seriousness, a version of the plug-in could have been released on Tuesday… we have an installer ready and everything.  But it just wasn’t quite there. It was very good. Maybe most people wouldn’t have noticed. And I wouldn’t have to keep making excuses for it. But alas…

Here’s the thing, I probably could have released something and moved on but knowing the importance of these core features would have been a bummer to have a version of the plug-in that didn’t have them. And because they relate to the core of the plug-in, it wouldn’t be an easy V1.1 update thing.

The plug-in was supposed to be pretty simple. And in some ways it is. But the intricacies of the internal algorithm really set it apart. As my development team will tell you, ideas always start simple and then you start to think about the possibilities.

Despite the chaos and frustration (including yours!) , the only thought going through my head after missing the deadline: “It’s going to a take a little longer but wait til they see this!!”

I hope it will be worth it!

We are very close now, we don’t usually release anything on weekends Monday is our target!” – Andrew Kramer

Build your own City of the Future with this fantastic set of 3D models that were created and contributed by fans of Video Copilot. This City Pack requires Element 3D V1.6 or higher.